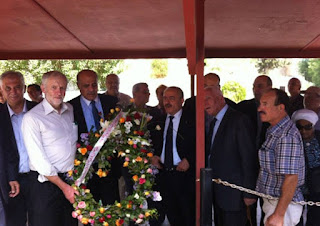 Further analysis of the pictures of Jeremy Corbyn at the wreath-laying ceremony in Tunis confirm that he laid the wreath on the grave of three leading members of Black September, one of whom directed the terrorists who murdered eleven Israeli athletes in Munich.

The picture above shows Corbyn with his Tunisian hosts about to lay the wreath. The picture below shows the wreath laid on a tomb. 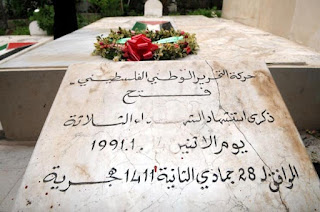 The inscription describes the three martyrs who were killed on Monday, January 14, 1991. Those who died on that date were Salah Khalaf, Fakhri al-Omari and Heyel Abdel Hamid. The event was reported in the New York Times.

I am grateful to James Bickerton for carrying out this research and securing the translation of the memorial stone.

So there is clear evidence that Corbyn did lay a wreath commemorating the men who directed the Munich Massacre.

Bickerton has also helpfully provided a link to the Morning Star article which Corbyn wrote about his visit to Tunis, so the Daily Mail quotation attributed to him is now authenticated. The link is here.

In his article Corbyn attributed the murder of the Black September terrorists to Mossad rather than the rival Abu Nidal group. He is not good on detail and it is not possible to say whether he was incorrectly briefed by his host, misunderstood what he was told or forgot. But given his long identification with the Palestinian cause, it is inconceivable that he did not know that these were the leaders of Black September and that they ordered the Munich Massacre.

Posted by George Stanford at 02:32