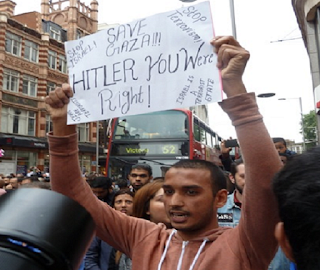 The Labour Party's inquiry into Antisemitism was a whitewash and did not satisfy critics.

That is because the problem of the Left is not Antisemitism but fanaticism and an inability to listen. Anyone who has seen this faction at close quarters (as I have for many years) knows how much it is driven by hatred. It has to have a demon. After the collapse of the Soviet Union and the failure of social democracy the Left has been forced into negativity, taking its Antis - Anti-Americanism, Anti-Imperialism, and anti-Zionism - to passionate extremes.

So it's no accident that anti-Zionists compare Israel to South Africa and Nazi Germany. The factual questions as to whether Israel practices apartheid or genocide are less important than making Israel the Left's current demon.


The Labour Party inquiry did not deal with these questions. It fudged the overlap of Antisemitism with anti-Zionism and found that there have been a few instances of Antisemitism in the party and that they should be dealt with more firmly in the future. The deeper question of the natural intolerance of the Left, its essential illiberalism and its tendency to extremism, was not touched on at all.

The Left is bound to be anti-Semitic because it defines racism as prejudice plus power.  Thus, by definition, people with power cannot be victims of racism and, since Jews have power in Israel, Antisemitism is not racism. Only Blacks can be victims of racism and Whites are oppressors. It is legitimate to hate oppressors and since Jews are White it is legitimate to hate them. The few tactless outbursts of explicit Antisemitism on Labour's Left are not an aberration but an expression of this Anti-Racist ideology. Ken Livingstone says it explicitly and when Jeremy Corbyn says that Labour stands full square against racism and Antisemitism he has his fingers crossed behind his back.

This mind-set means Antisemitism in Labour cannot be tackled by the Left. Len McClusky, the leader of the powerful trades union Unite and a cheer leader for Corbyn, moved on to the attack by saying that accusations of Antisemitism were just a ploy by the Right to get rid of Corbyn. McClusky is a more effective leader than Corbyn and he is bound to fight Corbyn's corner; but he is more right than he knows: this problem does require the removal of Corbyn and the Left from the leadership of the Labour Party.
Posted by George Stanford at 06:50 No comments: